Running a bit late with this one..... 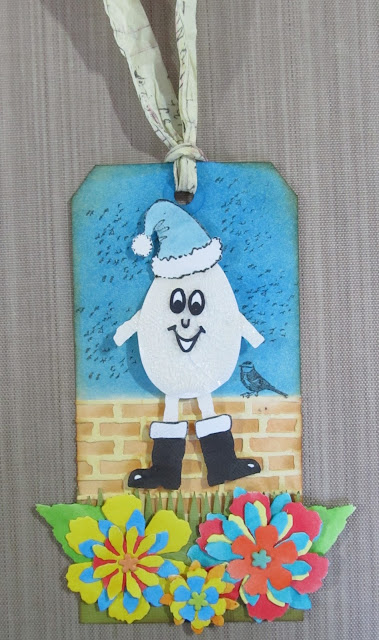 I don't have the Easter Bunny die so I thought I would go with an egg which then turned into Humpty Dumpty following my nursery rhyme theme!  See how cute he looks sitting on T!ms wall - here is a quick tutorial on how to get the tag made:

Firstly draw a feint pencil line about half way down the tag and ink the top half with Stormy Sky and the bottom half with Tea Dye: 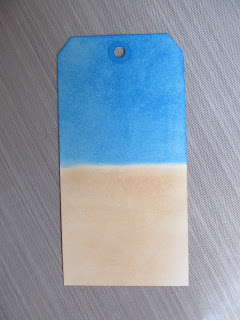 Then cut out the brick wall and ink with Scattered Straw: 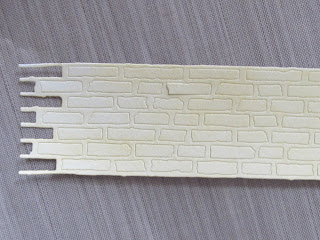 Next make a mask using spare card and the brick wall die and place in position on the tag - hold in place with masking tape: 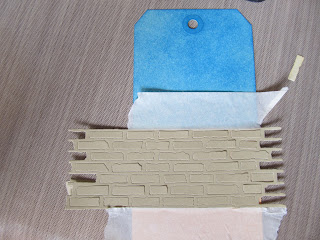 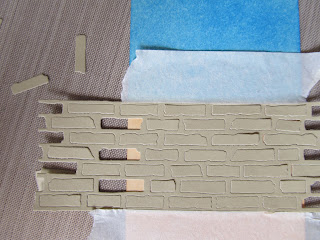 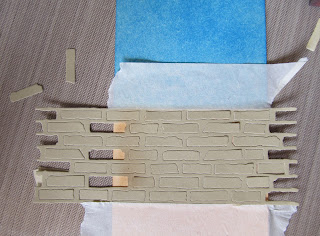 Replace the first three bricks and remove the next line of bricks and ink in the same way: 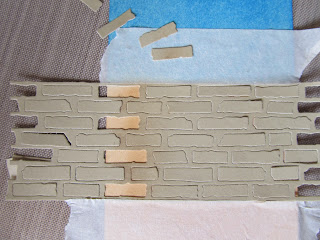 Continue to do this across the width of the tag: 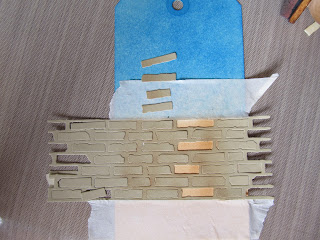 When you remove the mask you will have this effect: 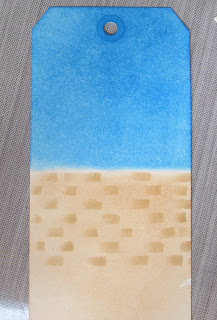 I know its more time consuming but it makes such a difference to the finished tag that it is worth it!
Remove the bricks from the scattered straw die cut and place in position - see how more realistic the bricks looks with the extra shadows? 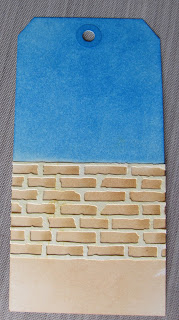 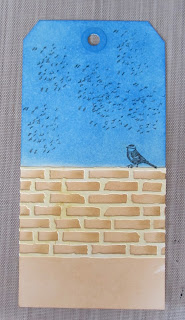 Make Humpty - I didn't have a big enough egg shape but I cut out a small easter sizzix egg and then drew a larger version of it and hand cut him out.  I finished him using some of the remaining bricks from the wall - I quite like these as the bobbly bits make them look a bit like elbows and knees! 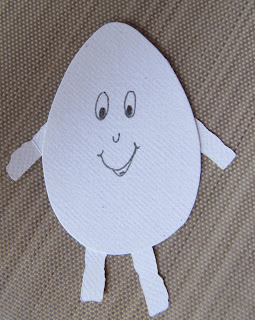 I drew a face on him so I knew where to position the finished pieces and then covered him with crackle glaze and left him to dry overnight.
I added grass to the bottom of the tag - here I handcut out a strip from green card as I don't have the T!m grass die yet (so need it though as I seem to be using a lot of grass strips on projects at the moment!): 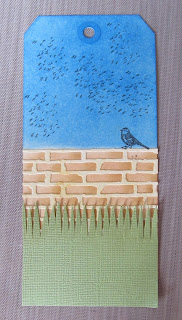 I finished Humpty off with Santa's boots and hat (I figured Santa wouldn't be using them this time of year!), and positioned him on top of the wall: 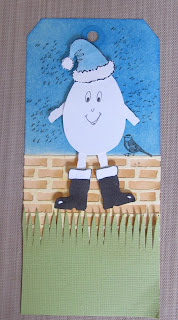 I added some flowers from the Tattered Flower Garland die which I inked up with various spring colours (I do have some metal flowers but not many spring coloured alcohol inks so I preferred to use these to make the tag nice and bright): 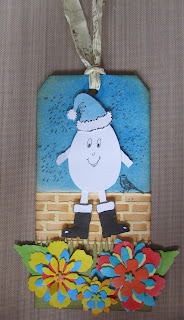 and voila - finished tag with Humpty's happy face completed - for this I just handdrew eyes, nose (very fiddly to cut out!) and a mouth onto white cardstock with a Black sharpie pen and cut out the individual pieces and glued them in place. 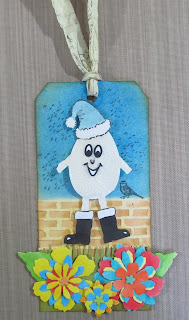 I finished the tag by inking around the edges with Vintage Photo and then doubled up some tissue tape, crumpled it and used it as a ribbon.
Thanks for looking - Feeling springy from Solihull﻿
Posted by Sunshine Girl at 10:46 5 comments:

Tim has a challenge on his blog to win $100 worth of stuff! all you have to do is use the tattered flowers (from the sizzix die) on your project.  So I had a little ponder for a few days and then I spotted some pompom people and from there I decided I was going to make people with my flowers.  Then, with the idea in my head of somehow creating flower people and being a child that grew up in the 1970s when I used to watch Bill and Ben the Flowerpot Men, I got the inspiration to make my own Flowerpot Men.

I sent OH out to buy some tins of beers which we had to drink one night (all in the name of art of course!) so that I could cut out some metal flowers, these were then inked with alcohol inks.  In the meantime I made up some faces using a mould and fimo which were left overnight to dry and then yesterday I got a chance to finally play and put them all together.  I based their names on my two children Oliver and Benjamin and here they are: 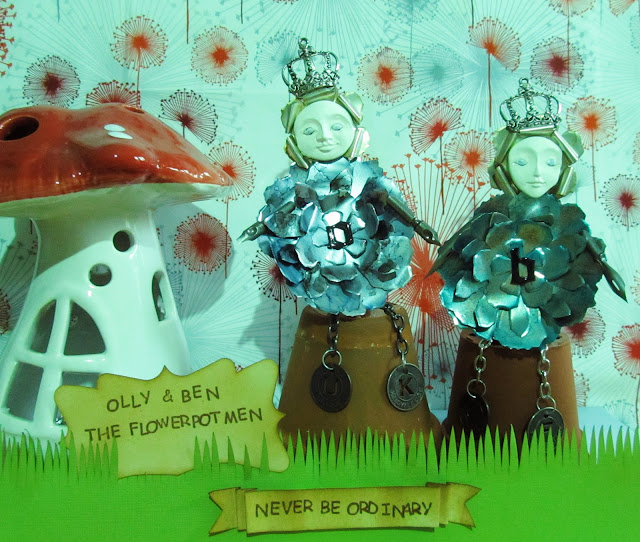 I apologise about the poor picture quality - after a few lovely days of sunshine the rain has suddenly reappeared in England and looks to be staying for a while so this is the best my daylight bulbs and photoshop skills can manage!

The flowers are cut from the aforementioned tin cans and coloured using stream, stonewashed, copper, pitch black and peach bellini alcohol inks.  I finished off the men with pen nibs for arms, T!ms muse tokens hanging from chains for legs, an 'O' and a 'B' cut from the Once Upon a Time die with black card covered in glossy accents for a nice shine and two crowns.  The faces I finished by lightly inking them with Spun Sugar and then drawing on eyes with Stormy Sky and Black Soot distress markers.

I handcut the grass out of bazzill cardstock (took ages - so need that new T!m grass die now!), the sign is from T!ms Signpost die and the banner is handcut - both titles are stamped using an old Inspirations alphabet set in coffee archival ink and then inked with Vintage Photo distress ink.


Here is a closeup of Olly: 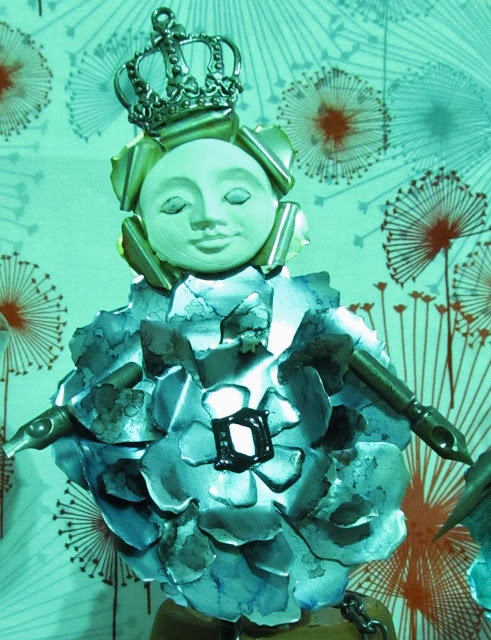 Both are sat on some old flowerpots that I found in the cupboard (who knew we had those!) - they are nothing like the original Flowerpot Men as they were made out of flower pots hence the title Never Be Ordinary!

Hope you like them! they are a big hit in our house and have pride of place on top of the bookcase in the lounge!

Thanks for looking - A Blossoming Artist from Solihull
Posted by Sunshine Girl at 16:30 9 comments:

Have had a fabulous day today doing a demonstration at my local Hobbycraft of T!m and Ranger products.  I did a free make and take of this tag:

and here I am demonstrating to two new crafters: 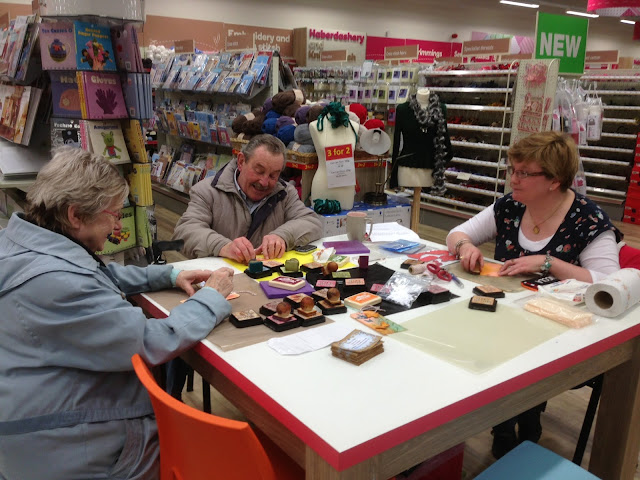 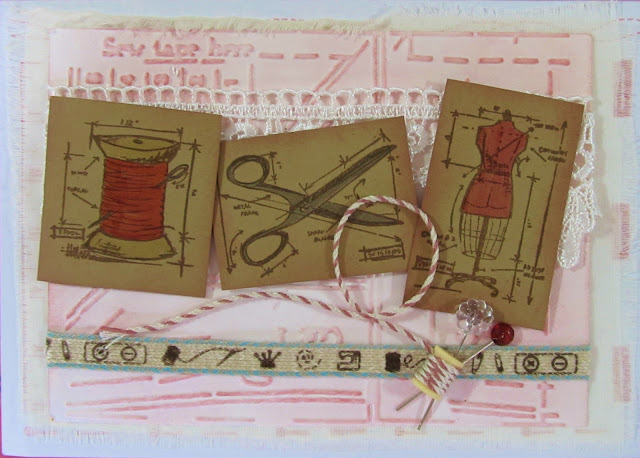 Cost will be £10 - booking is essential and can be done by emailing me at sunshinegirl_hillfield@hotmail.com.  I look forward to seeing some of you there!

Thanks for looking - Covered In Ink from Solihull
Posted by Sunshine Girl at 16:14 6 comments: