Thought I would join in again with the nosy peek around the world of creative desks this week. 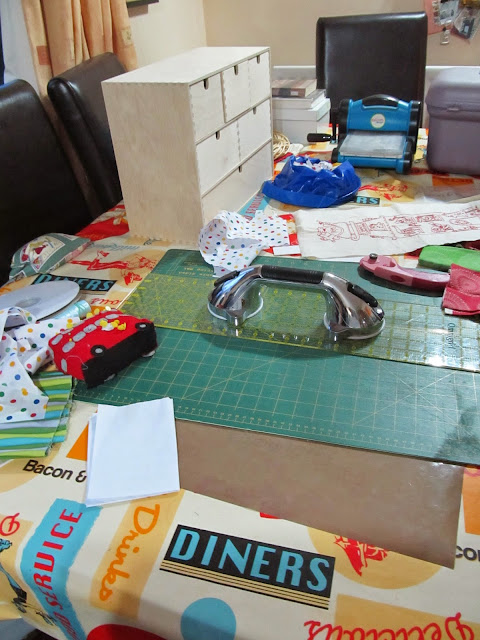 The material to the left is to finish off a Christmas quilt I started last year, I have just cut out the pieces to make the back the same size as the front which is why my cutting mat is out (I bought a new A1 mat at Malvern the other week but haven't used that one yet - its a whopper though and will make cutting out large quilt fabric sew much easier! at least I hope it will!).  The redwork in the middle is something new I fancied trying - again I bought the pattern at Malvern and have already finished all the stitching - very relaxing to sit and do in front of the telly at night - the red and green fabric to the right will be used to frame it and make it into a wall hanging.  As you can see I had a trip to Ikea at the weekend and have treated myself to their big set of wooden drawers and they are just left on the table from when I bought them ready to be pimped up big style - and yes I still have the middle sized wooden box that I bought a few years ago still half pimped but hey ho they will get done someday!

The large books at the back of the table are to do with my reading frenzy, they are all large print scandanvian/Icelandic crime novels and what possessed me to get four hardbacks from the library at once and walk home with them in my backpack I am not sure but I did!

Sizzix machine there because it lives there and that little bit of wicker sticking out behind the box is actually a wreath I bought from a lovely place called Willows and Wetlands in Somerset in the half term to make a fabulous seasonal wreath each season for my front door - thats the plan anyway!

That's my crafting life on my desk this week (the lounge has even more stash in it as I am on a bit of a crochet/sewing thing at the moment) so come join in the fun over at Julias and show us yours.

Quickly edited to add:  Completely forgot that I did take myself off to Hobbycrafts at the NEC last minute on Sunday (I only live 10 mins away from the NEC so I thought it rude not to!) and bought these goodies to have a play with: 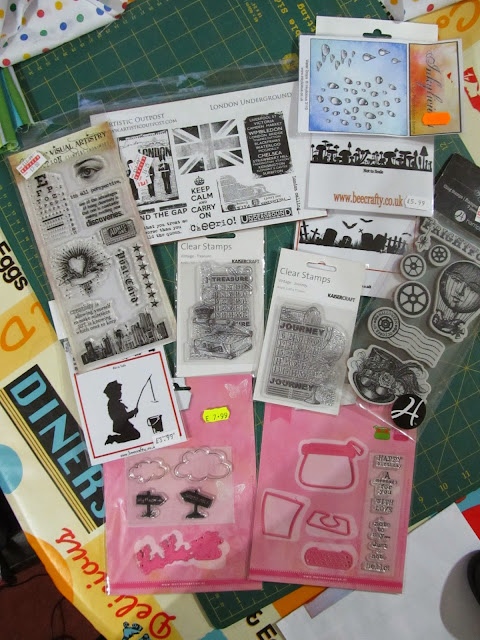 Most bits and bobs were in a sale but I couldn't resist that Banksy stamp - no idea what to do with it yet which isn't like me I usually look at something and conjure up an image of what I am going to do with it before buying - I do think that those raindrops and Tim stamps have lots of potential though!  I also bought two balls of beautiful alpaca wool to make a bat and an orangutan of all of things!

Have also updated my blog to include my YouTube tutorials.  Another new venture of mine.

Thanks for looking - Measuring up from Solihull
Posted by Sunshine Girl at 07:23 19 comments:

Am still trying to get back into the habit of blogging - after such a long break I seem to have lost the knack!

As promised though I will try and update more regularly on a few projects I have in the pipeline, I completed this little cutie a couple of weeks ago: 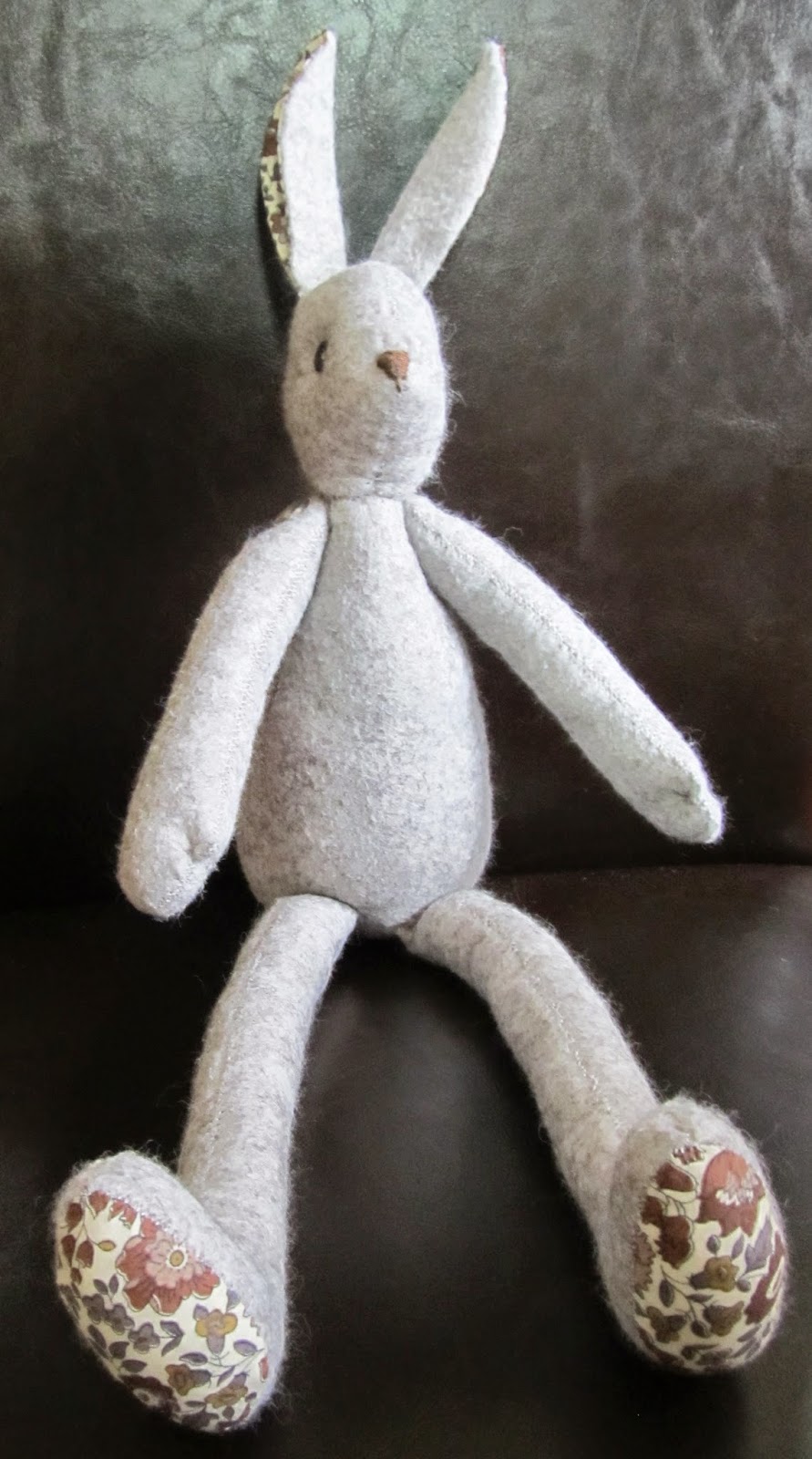 I was going to call him Benjamin Bunny but as my youngest (Benjamin) has decided to have him for himself I can't so I am waiting for him to name him.  He was made from a kit I bought at the May Malvern Quilt show and I also have a lovely waistcoat, trouser and shirt kit to dress him in, although that's still in the pack at the moment!

Here is a closeup of his face: 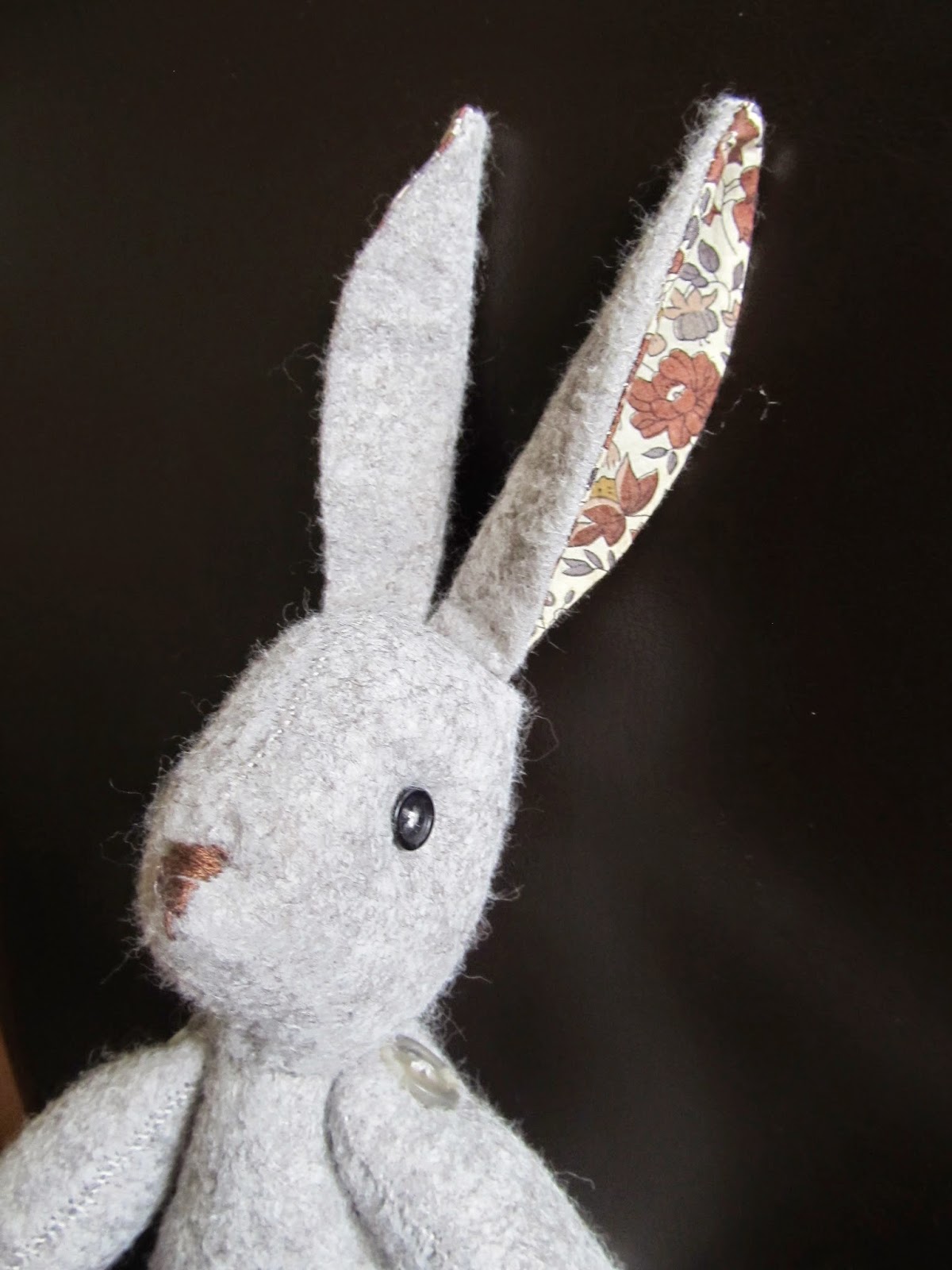 He was made using a lovely grey felt and bits of Liberty fabric for the ears and feet.  There was another piece of the same fabric in the kit along with a pattern to make a dress but as mine is a boy I gave the material away and will not be making the dress - Benjamin wouldn't be impressed!

That's all from sunny Solihull at the moment.

Thanks for looking - Happily sewing from Solihull
Posted by Sunshine Girl at 10:36 7 comments: