Finally I have gotten a chance to play today!  Whoo hoo - have left the children to sort themselves out and whilst they are happily playing on their Xbox's I have got out some of the new bits and pieces I have bought recently (one die I only bought this morning!) and some others that I, er, bought quite a while ago but have been sitting there waiting patiently in their packaging for me!

So I decided to have a go at Tims August tag as this months was right up my street.  I haven't changed it much as I liked the sample so much! 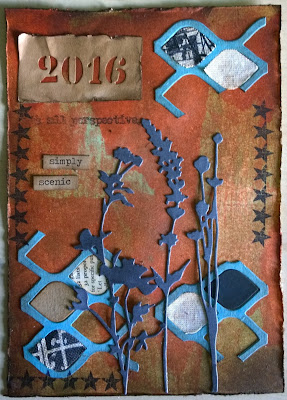 Mine has been mounted onto a card rather than doing a tag this month - for the background I have used Ripe Persimmon and Pumice Stone stains - not my usual colour palette but I just grabbed the first two out of my vast collection of stains, talk about living on the edge eh!  And as for brayered stains, I can honestly say I have never used this technique before!  Where was I, how did I miss it??? feeling really rather confused about it I can tell you!  Also I think my Pumice Stone stain has had it as it is now mainly all green rather than stone but hey ho it made for an interesting background, and I will definately be using this technique again in the future - so simple and yet so lovely (mind you aren't they all!).

I then used my new, been sitting there waiting patiently in the packaging for me for months, wave frameworks die.  I cut the frame out of kraft cardstock and painted it with Broken China, again the colour just picked out randomly but thankfully it all goes together nicely!  The bits in between are cut out of black or kraft cardstock, some London fabric from a top I have just made, some Calico and a book page - all edges were inked with Vintage Photo on the pieces and Ground Espresso on the frame.  Oh and I inked the background with Vintage Photo and splattered it with water (something I don't usually do) and inked the edges with Ground Espresso too.

I finished with white diecut wildflowers inked with Black Soot - again this is in an newish unused die but I did cut out the flowers a while ago and they were just sitting there waiting to be used so I used them rather than cut out more in black cardstock (basically because my sizzix machine and dies are now downstairs and I was too impatient to get sticking down rather than move myself!).  I then finished with a 2016 cut out with the brand new Stencil Numbers sizzix die I bought this morning as it was on sale in Hobbycraft - can't beat a bargain eh!  and then a couple of words from Tims ChitChat sticker set.  For once I haven't sewn on the card  but hand stamped using a couple of background stamps from the City Central set.

Thats it - whoo!  For details to see how to create the tag/card pop over to Tims blog here

Thanks for looking - inky fingers from Solihull

Posted by Sunshine Girl at 16:16 No comments:

I enjoyed the videos yesterday but not really had time to put them into practice - one of the perils of doing an online course during the school holidays when the weather is fabulous and the children are home I guess! 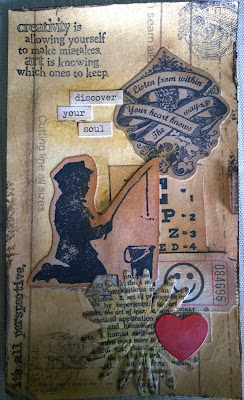 I never actually do collages - not sure why I neither like nor loathe them but thought I would give this a go with just some bits I had ready made in my go to box.  I don't have the plain tissue paper and although I have some printed tissue paper I decided to use an old sewing pattern instead - not sure what all the collaged bits and pieces are but the stamps I have used directly onto the finished piece are from Tims City Central set and I also had to use glue n seal instead of collage medium.

I have also had a quick go at distressed grit paste grunge piece: 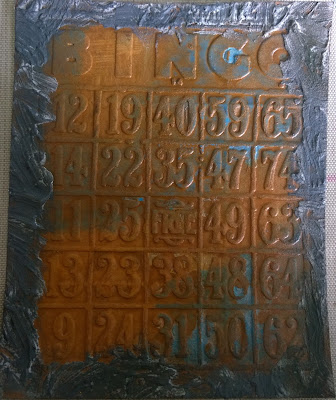 however I don't have any grit paste either so this was done using texture paste over an eroded metal piece of work which I also found in my go to box (as you do!).  Not sure I like this much but I don't have time to finish it just it yet so maybe it will grow on me when I finally do!

Thanks for looking - eagerly awaiting CC103 Day four in Solihull
Posted by Sunshine Girl at 12:52 No comments:

Well I think my inky mojo might have finally returned after its long semester!!  I knew I could rely on Tim to get the motivation flying again!

I am taking part in Creative Chemistry 103 - I was hoping to do the two reruns of 101 and 102 over the past few weeks too but that just didn't happen what with DS2 leaving Junior school, holidays and my sewing frenzy for a new wardrobe but I did tune in yesterday to 103 (I actually forgot on Monday but I was busy completing Lego Star Wars The Force Awakens on the xbox with DS2 to 100% - whoo hoo!!  - I feel I have to grasp these moments fiercely now as he will be at senior school in September and will no doubt not want to play lego games with Mom for much longer! - don't worry though I am not ashamed to play them by myself!!!).

Anyway I have made a card this morning!!! Before 9am too - blimey!  First time in ages that I have sat down and just played rather than planned a workshop or made a product to sell in the shop and I must say it is a welcome relief!! 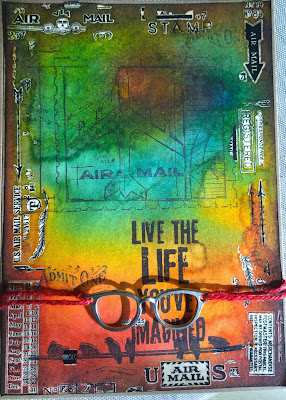 I decided to do the Distress Stain Rub Resist technique as I have done this a lot in the past so was a bit in my comfort zone however I did cut up the rub on sheet and place random rubons around the card - even ripping some which, believe me, is way out of my comfort zone, I even smudged some of my stamping too!! so I feel I have achieved a lot this morning already!

I used mustard seed, spiced marmalade, abandoned coral and broken china distress spray stains (all of which were bought six months ago and still had the seals on!), Special Delivery rub ons, Ground Espresso ink around the edges and then stamps from the Life's Possibilities, Travel Blueprint and Little Labels sets.  Finished simply with some metal glasses (no idea where they are from but aren't they cute!) and some red jute which I think I bought from Tiger.

I now have to sit and wait patiently for about 5 hours for todays class!  Might just go make another card....

Thanks for looking - inky fingers from Solihull
Posted by Sunshine Girl at 09:15 No comments: