It's my turn - whooo hoooooo

For this hop I have decided to have a play with around various techniques and have had a fabulous time making these: 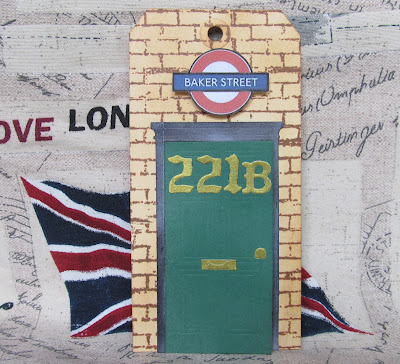 For this I wanted to use my new Sherlock Holmes stamp from Artistic Outposts London Elements set so I thought what better way than the infamous door of his flat in Baker Street.  I used my new die from Poppy Stamps - Grand Madison door - cut from white cardstock and inked it with Black Soot and Pine Needles distress inks.  The gold letters/number are from T!ms sizzix dies Upon a Time and Santas Workshop, the gold doorknob and letter box are just from scraps.  The background is done using a Prima brick wall stamp inked in Coffee Archival Ink and coloured with Tea Dye distress ink.

But where is Sherlock I hear you all cry, well here is the inside when you open the door: 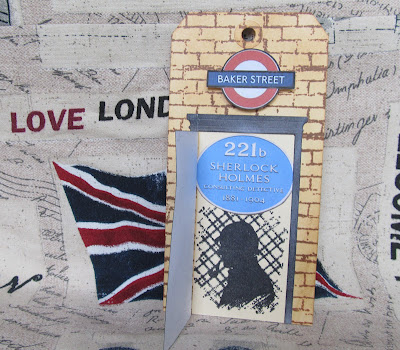 see my lovely new Sherlock stamp there - he is on another piece of artwork in a minute too!  The Baker Street sign and 221b sign are just printed off the internet and handcut.

The second British item I made was this: 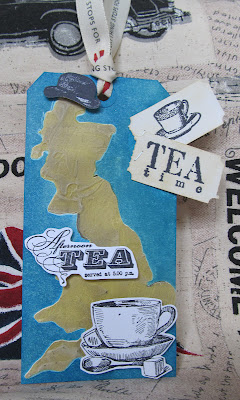 which I am super pleased with.  I used a Creative Expressions (I think?) template to trace around the British Isles onto a T!m blank mask.  I then cut it out carefully giving me a positive and negative image of the Isles.  I placed the positive one on the tag and inked the sea using Broken China Distress Ink.  Then using the negative template I used some modelling paste to create the land - giving it a fabulous bumpy texture just like real land! when dry I coloured this with Forest Moss distress ink.  The afternoon tea and cup are from my Artistic Outpost London Elements set and the Tea Time, small cup (stamped onto two of T!ms sizzix ticket diecuts) and the bowler hat are by Artemio - all stamped in Black Archival ink.

As I had used my new door die I thought I ought to use the new Grand Madison Window (also by Poppy Stamps) one too!  Have had this visualised in my mind for a while now but just hadn't got around to making it: 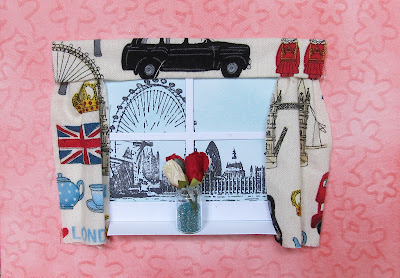 For the background I used a sizzix texture plate on plain card and inked it with Barn Door Distress ink - it's redder than it looks in this image!  The image in the background is a London scene by Creative Journey - their "London" set stamped in black archival and inked with Tumbled Glass distress ink.  I then decided that the window needed curtains so I used some left over scraps from a quilting blog hop I was in a few weeks ago (which inspired me to host this papercraft one!) and then of course I needed a window sill (simple piece of folded card stuck behind the window and scored to make a sill) and then finished it off with a glass vase full of glitter and flowers (surprisingly light as the sill didnt need any extra support!).

Obviously by now I am on a roll so I decided to play with some masking fluid I have had for a while but hardly used: 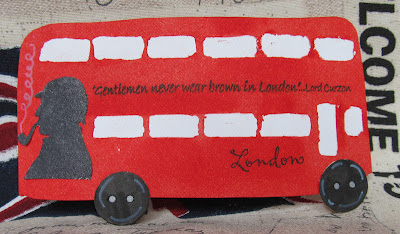 I found an image of a London Bus on the internet, printed it out to the right size and then cut out all the windows with a sharp knife.  I then drew around the bus onto white cardstock and cut it out.  Using the template I masked all of the windows using the masking fluid and when dry I inked the bus with Barn Door distress ink.  Finished with a handcut Sherlock Holmes.  The "Gentlemen never wear brown" quote is from the Creative Journey - "London" set too and the word "London" is from a Penny Black London scene.  I used two button diecuts from T!ms mannequin die set, coloured them with a Black Soot distress marker, place silver card behind them and stuck them on as wheels.  I then used a Picket Fence distress marker to do the pipe smoke and finish the wheels. Great Fun!

For my last piece I just had to use my mannequin die (I know it's my most used die at the moment but I just can't seem to get enough of it!): 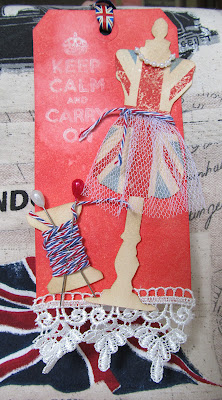 The technique here is using Picket Fence distress stain (marvellous stuff that you definately need!) to stamp out the Keep Calm quote by Inkylicious - Union Jack part 2, then I inked the tag with Barn Door distress ink and spritzed it with water to remove the ink from the text making it pop (I was trying to emulate the famous poster here!).  I then stamped a mannequin with a Union Flag - from the same set as the quote - in Barn Door distress ink and Stonewashed Adirondack ink.  I inked the mannequin and cotton reel with Frayed Burlap distress ink to tone them down, put red, white and blue twine (how fabulous is that!) around the reel and finished with two pins (not got a blue one!) and a nice white trim and Union Flag ribbon to finish.

I hope you like what I have made for the blog hop - I had great fun putting all of these together.

To carry on with the hop here is the list of today's participants:


and just in case you missed it here is the schedule for yesterday:

I would just like to say a big thank to all the girls that have joined in - I hope you all had as much fun as I did.  I will probably organise another one for 1st September - what do you all reckon? theme to be decided!

Thanks for looking - Proud to be British from Solihull
Posted by Sunshine Girl at 01:00

This has been SUCH fun.

My daughter's last job was working in Baker Street!

your tags are brilliant,

I can see you have had fun with these tags. They are fabulous.
Well done for organising the Hop. You did a grand job.
xx

Amazing pieces of work - gonna lift that sherlock tag idea for my Dad's next card as he is such a fan.

Wow! You have been busy...i absolutely love the sherlock one, genius. This has been so much fun, thanks for organising and letting me take part x

Wow these tags are so cool you have done a fantastic job creating them.

Oh my goodness! You are a busy little bee! Love your projects...very creative and exciting! Hope you aren't too tired for your Think Christmas day tomorrow...looking forward to seeing your creation!

WOW!! Look at all the projects you made!! They're all incredible! And I must say I LOVED the Sherlock Holmes door, and the fact that the door opened and he was inside...brilliant!!!

Thanks so much for inviting me to hop along with you guys...it was fun!!