Dashing through the snow

Well here it is - my twelfth T!m tag of the year: 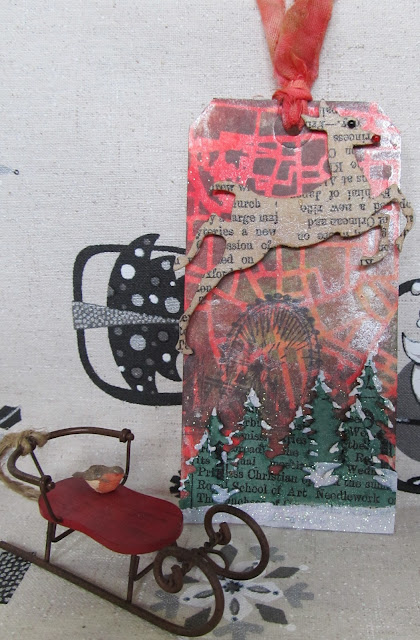 The colours arent the best on this photo so here is a shot of the tag before I added the trees and reindeer: 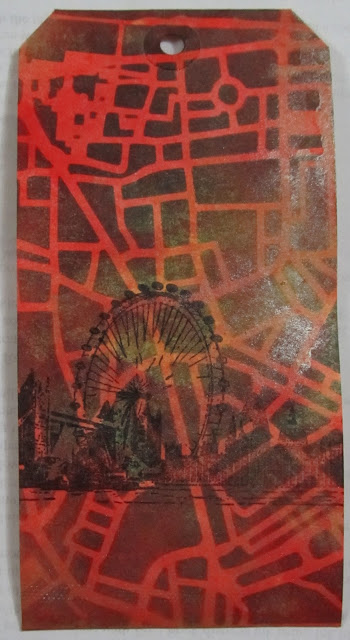 They are so vibrant in real life - photos never really give our tags justice do they!  I have added the stamp and mask to keep in with my British theme.

If I had realised 11 months ago that when I said "My 2012 tags are all going to have a British theme" just what an extra big challenge I had set myself I might not have attempted it.  However attempt it I did, and what a wonderful extra push it gave me - yes it was tricky and some of the tags actually took me a couple of weeks to ponder over just to come up with a British theme but it took me out of my comfort zone and made me a lot more creative.  I haven't made as much stuff as I usually do this year - I think losing my Nan in February has had me on an emotional roller coaster this year but when I havent felt like creating much I have just wondered off and done something else - I know creativity doesn't have a switch that you can just press when you want to make something but I do know that lack of creativity happens occasionally and not to stress about it but to go and do something else that fills your time and gives you pleasure rather than sitting at a desk for hours getting frustrated when nothing goes right (yes have been there too!).

Anyway I am digressing - all my T!ms tags this year have had a British theme:

February - Hearts with Union Flags
March - Tower Bridge with Union Flag bunting
April - "Keep Calm and Carry On"
May - Red, White and Blue
June - London scene
July- London eye scene with fireworks over the Thames
July again - City of London stamp with fireworks
August - Sherlock Holmes (which was a winner too - whoo hoo)
September - Union Flag done in metal
October - United Kingdom as a huge graveyard
November - London telephone box in Autumn
December - Snowman with Tower Bridge in the background with baubles hanging from it like the olympic rings
December again - Reindeer dancing over the streets of London.

Whew - I am amazed that I managed this myself - but what fun it was.  Wonder what the theme will be next year??  I also think it's funny that I have got to the end of all twelve without a Winnie The Pooh, Peter Pan or Alice In Wonderland one done - these were my main ideas to use way back in February!

A big hello to my newest follower Linda F - hope you enjoy my blog and also a big thanks to everyone who visited and joined me from T!ms blogworthy link, I am just 73 hits off 3000! how amazing is that!  Beats my link from www.Microsoft.com which is just under 2000.  Who would have thought my little blog would generate that much interest - I am so pleased and grateful to you all for your lovely comments.

Busy day ahead for us as we are off to Cadbury World - whoo hoo.

Thanks for looking - Off to eat chocolate from Solihull
Posted by Sunshine Girl at 08:08

A fabulous set of tags. Congratulations. I'm impressed that you've used the new stencil already. I haven't even unpacked mine!

A wonderful tag with great details.

Gorgeous thanks for the close up of the colours. Really do need to organize myself to get some of the London stamps/masks for my London album. Managed the cover and first couple of pages for your blog hop and then.... life got in the way.

Enjoy Cadbury World, you're just around the corner from Woodbrooke the Quaker centre then :)

Hope you had a great day at Cadbury World. I always love the 'freebies' there and always spend way too much in the shop!!
Now this tag is one of my favourites. I'm off to find your mask after this as it's a cracker and one I could use a lot. Well done with keeping up with the additional theme too. You really pushed the boundaries and it paid off. Are you going to scrapbook them to remember this fabulous year of 2012?
Huge well deserved congrats too on your blog popularity. Next year the sky will be the limit methinks. Hugs, Jenny x

Great British theme for you tags this year. Happy Christmas to you - love BJ#1

Sorry for not being around to comment much. A lot going on at home at present. Have had 3 close family members all in different Hospitals around the country within weeks of one another. Uncle is still in but hoping against hope to be allowed home for Christmas. Gosh is it really a year from the last lot of tags!. This one is really good. Hugs Mrs a.