Felt like playing again yesterday so I gathered up all my spare configuration boxes that were left over from my gravestone and decided to make a Christmas Tree table decoration: 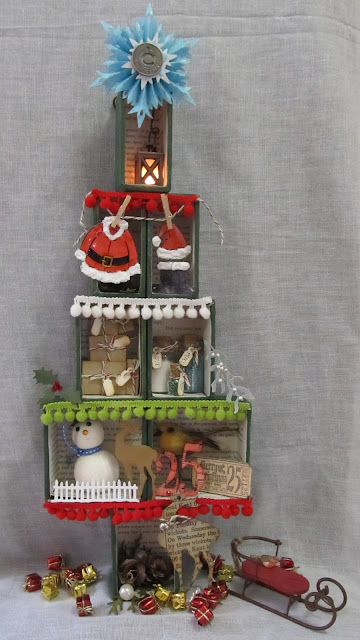 Just used various bits and pieces that were lying around really - T!ms pinecone, the mover and shaper Reindeer and 25, the large reindeer, ticket (and stamp), festive greenery, snowflake and Halloween shadows dies, two polysterene balls covered in glitter and made into a snowman - used bling for his nose and eyes, ribbon for scarf and buttons for his hat.  Parcels are simply handcut pieces of kraft card stock with the edges inked and tied with festive twine and a tag, the little jars are filled with glitter - here is a close up of their tags: 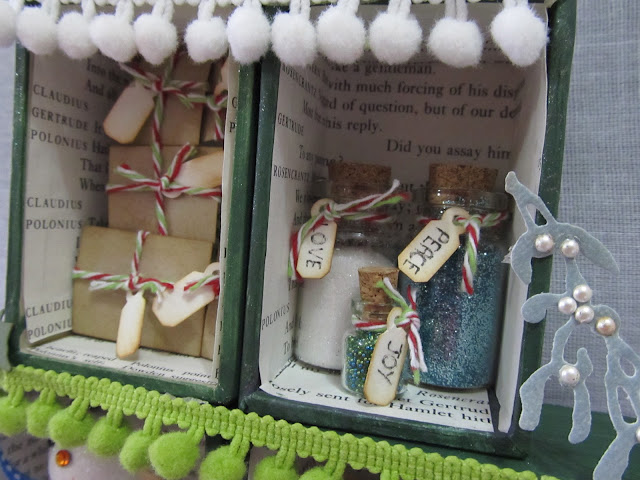 The Santa's washing line is made up from some old Penny Black (I think) stamps - inked with Jet Black archival, coloured with distress markers and then covered with glossy accents to add shine and puff paint to create a fur effect: 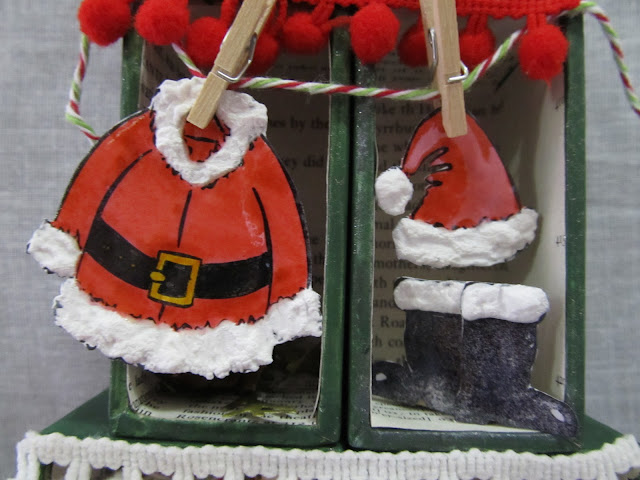 I only really used Vintage Photo ink on here with Broken China and Brushed Pewter stains on the snowflake. Finished the tree edges with festive pom pom ribbon, T!ms lantern - how cute is that! and a robin that I bought in a set of three last year.  The tree itself was made up from spare configuration boxes, painted green using PaperArtsys Fresco Finish Hyde Park paint, the insides were covered with some pages from Hamlet and then the whole thing sprayed with Old Lace glimmer mists - it has a lovely sparkle!

All in all a very nice days play - sorry for poor pictures its another rainy day here!

Thanks for looking - Feeling Festive from Solihull
Posted by Sunshine Girl at 12:55

That is wonderful...Have a very happy Christmas...xoxo Sioux Thanks for your happiness for me...I still can hardly believe these feelings!!

Goodness that is an absolute triumph of a decoration! I so love the attention to detail on every element - the parcels are amazing, as are the little bottles and that lantern at the top. So glad to see your mojo is well and truly back and imaginative as ever. Have a wonderful family Christmas my crafty friend, hugs Jenny x

Oh now that is a good use of glitter - nicely contained too ;) That washing line is wonderful, the puffy paint gives such a nice touch.

Sounds like you had lots of fun making this. Looks fab. I went to the NEC on the Sunday. I kept looking around to see if I spotted anyone from their blog photos! Fat chance! Hugs Mrs A.

Oh my word this is so adorable!! Thanks for joining us at Stamping Sensations and Happy Christmas.
Pinky

WOW!!!! This is wonderful. I love the design and all the detailing you have added looks fabulous.

Thank you for taking part in the Stampin' for the Weekend Challenge and Happy Christmas to you too.
Sue

How cool is this ?! Such a fabulous idea.
A Merry Christmas to you and yours.

Brilliant idea - you must be out of boxes by now with all the ways you've put them to good use!!

Love the details and the puffy paint looks fab on the Santa clothes!

This is a fabulous Christmas project.
Thank you for joining us at Crafting for all Seasons.
Pauline
x

What a lovely Christmas project and really great take on our theme.

Thanks so much sharing with us at Stamping Sensations challenge this month.

Wishing you a Happy New Year.

beautiful, thanks for joining us at Stamping sensations this month and good luck!

Wow this is great! Thanks for joining us at ABC Challenges!

That´s so very lovely! What a fab idea! Thank you for joining us at Crafting for all Seasons! xx Bianca