And here is my third layout for my Challenge Number 3! 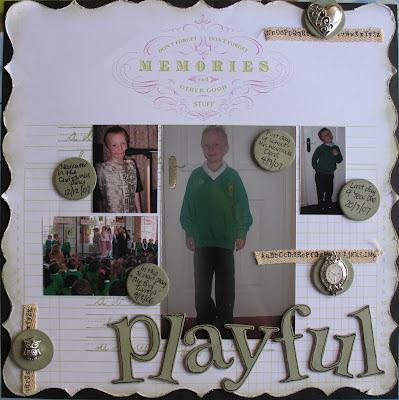 I found this layout a little bit more restrictive than the others as normally I would ink the letters with black soot around the edges rather than draw on them with the black pen and also the metal embelllishments would have had ribbon or string on them allowing them to hang freely on the circles rather than been glued on.  Also I would have preferred to have stamped images on the circles with the metal on and have used a different method to write the labels on the photos.  However I am still pleased with the result and thats another 4 photos off the pile and my third layout this week!  Its also a bit out of my comfort zone too as the photographs are all taken at different times - usually I like to have a layout with photos all taken on the same day but I have gone past the idea of putting these small pictures into a school book - thats something for another day I think!  Again I based the layout on a sketch - page 27 Page Maps 2.

Thanks for looking and if you would like to join in the with the challenge the post is here: http://sunshinegirlnicola.blogspot.com/2011/04/challenge-number-3.html - Go on don't be shy!

Thanks for looking :)
Posted by Sunshine Girl at 14:55